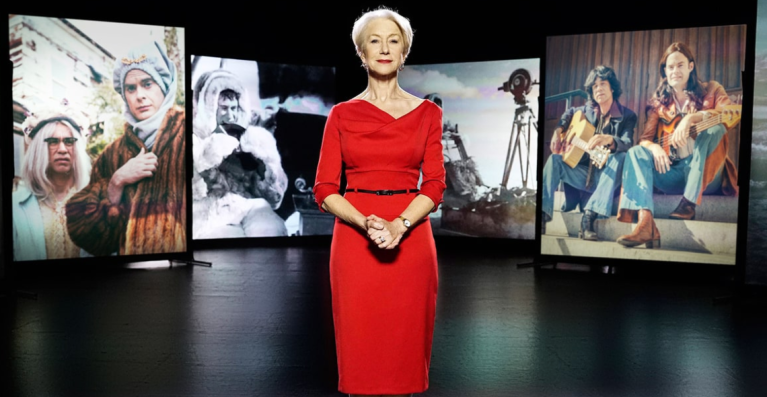 For some reason, Documentary Now! has a tendency to creep into the arsenal filed under the Netflix and chill category. It’s humorous enough to loosen a girl up and non-committal enough to stop watching when things get sexual. And, of course, no “man” can resist Fred Armisen (Bill Hader, for whatever reason, seems to have less cachet to the straight white “male”). While the “man” who puts on Documentary Now! means well enough–has no idea that his lack of knowledge about documentary film is highly offensive–his decision to do so is indicative of a larger point: he’s a fucking dilettante.

And while, yeah, there are a lot of those in North Brooklyn, there’s no reason to be that way in terms of documentary connoisseurship. There are so few major and important ones, after all–and each of them have been covered by Documentary Now! at this point (even though it’s been renewed for a third season). The worst offense of all on a “man’s” part is having no clue what the first episode, “Sandy Passage,” is supposed to be parodying. While some might argue that no straight “man” can be expected to have ever watched Grey Gardens, it is a behemoth of not just the genre, but film itself. As one of Albert and David Maysles’ masterpieces (ranked also with Gimme Shelter and Salesman), there can be no adequate excuse for any “man,” cinephile or otherwise, having evaded this film, or being unaware of it until Armisen and Hader came along.

Watching it after seeing Documentary Now! cannot remedy the shortcoming and, in fact, cheapens the film as the “man” in question is only watching it because he’s learned about it from the show. But he’s probably already very familiar with “DRONEZ: The Hunt for El Chingon” as a result of watching VICE News “documentaries” on a regular basis. Oh how the genre has deteriorated to such a point as to enable “men” to believe that simply watching Documentary Now! is a sufficient source for their enrichment in the understanding of the medium.

There are many claims in the current “feminist” era on the part of a “man” that a woman’s intellect is a driving force behind why he chooses to “be with someone” (in quotes in that we’re all always alone no matter who we latch onto to try to delude ourselves into thinking we’ve found a “like-minded soul” to mask the total isolation of existence). But, even as stamped out as sexuality becomes à la 1984, the primordial biology within a “man’s” makeup can’t help but respond to the Barbie archetype.

Thus, when you with your witticisms and Valerie Solanas look suddenly find yourself standing with your “man” in the midst of a woman who is, frankly, far more attractive than you are with her big tits, blow job lips and sun-kissed complexion, it’s only natural that he should completely ignore you. Because all “men” are visually-oriented swine that might consider putting their tongues back into their mouths if there was a woman there waiting to guillotine it off. Alas, you are still trapped in the twentieth century concept that being dainty and self-effacing is what makes all the “boys” come to the yard. After enough time spent being treated as invisible, however, you may soon come to realize that the best offense is a good plastic surgeon.

Watching a show with a new romantic interest is always something of a big deal, a strong indicator of the turn for seriousness and intimacy things are taking. Sitting with someone in a confined space for multiple hours is, after all, something you’re usually paid to do (see: office worker). That’s why one must be very careful about what he chooses to absorb with his femme de la semaine. Anything from the Criterion Collection is absolutely out of the question as it will be too tailored and memorable–plus, who are you kidding? She knows you don’t give a fuck about high art cinema.

Something too low-brow, however, like Rick & Morty, could send her running in the other direction. No, no–the best thing you can put on is something totally middle ground and universally loved. At least until you’re sure you’re going to be banging on the reg for more than just a couple months (usually the cutoff before the ghosting period begins). For some reason, certain “men” can’t seem to understand that Broad City is an ideal starter kit for dipping your toe into the TV viewing realm with a fresh body–somehow assuming that the girl they were formerly with’s “super quirky!” status makes her special enough to be the only goddamn dame who watches it. As if. The Broad City viewing clientele is a dime (and dame) a dozen. And the “man” who somehow thinks it’s hallowed or sacred viewing material from his previous “serious” relationship best stick to watching Modern fucking Family with this kind of deluded viewpoint. What’s more, we all know Ilana is a fairy godmother of instilling horniness.

For “men” who have gotten wise to the game called Attracting A Woman, the trick most easily picked up on is: don’t be yourself. Ever. Least of all if you want to sustain that rarity called steady pussy (a coup that doesn’t seem as important to “men” as the steady dick concept is to women). And yet the only thing more irritating than a “man” who wears a mask all the time is one who never takes it off. Mainly because what he’s masking is usually something more terrifying than merely the fact that he takes gnarly shits or has a set of fake teeth.

No, what’s lurking behind that mask is often so much worse than anything pertaining to the visual or olfactory senses. In the most predictable and expected of cases, the “man’s” veneer is concealing his sociopathy–which women are frequently fools in ignoring the signs for. In other, more off the beaten path instances, he’s a colonic fetishist (giving, not receiving). So while it’s all very polite and considerate to keep some modicum of one’s mask on for the sake of not revealing the full extent of unavoidable “male” douchery, it’s rather helpful to a woman to save her the time and trouble of finding out about what the mask is cloaking later on down the road. Because even if “men” find women to be largely “light-minded,” there can be no denying that one of the strongest aspects of female genius is exposing a phony baloney.