In life, there are some musical faux pas that simply can’t be forgiven. Apart from listing Like A Virgin as the best Madonna album, not having listened to the entire canon of The Smiths’ work is number one on the list of unforgivable sonic sins. The “man” who refuses to let the gospel into his life is often of the belief that The Smiths are “whiny,” or an even worse descriptor, “emo.”

Not only is this generalization petty and small-minded, it highlights just how susceptible the “man” in question is to absorbing regurgitation without actually finding out his own opinion for himself. To veto The Smiths based on the mere fact that Zooey Deschanel briefly ruined them by singing “There Is A Light That Never Goes Out” in 500 Days of Summer is not the mark of a very open or informed “man.” And those “men” who had already listened to The Smiths but decided they were too “grown up” for such things not only have no dick, but no soul.

The only other excuse a “man” might try to use to get out of being chastised for not having listened to the Manchester quartet’s complete discography is that he’s too young–the band is “before his time.” But alas, immaculate works of sonic brilliance exist outside the bounds of time, whereas some “men’s” dicks only existed in their mother’s womb when the umbilical cord was still mistakable for one.

As we all know, Belle and Sebastian is an infallible band. However, it’s also the band a “man” listens to when he wants to appear faux deep/intelligent. It’s the type of band he’ll tell a girl he loves in order to sweet talk her into the bedroom she imagines will be candlelit/peppered with razorblades that have dried blood on them to indicate just how “emotional” he can get.

Like The Smiths, Belle and Sebastian frequently have music nights dedicated to them so that “men” can pick up on an ideal trolling opportunity (usually to find other “men”). The latest one is, predictably, at the Grand Victory in Williamsburg. Undoubtedly, all of the worst sort of “men” will be there. The kind who can’t simply sit at home perfecting their horizontal cuts while listening to “Fox in the Snow,” instead of parading their duplicitous adoration for the band by using it as an excuse to soak their “dick” in someone. 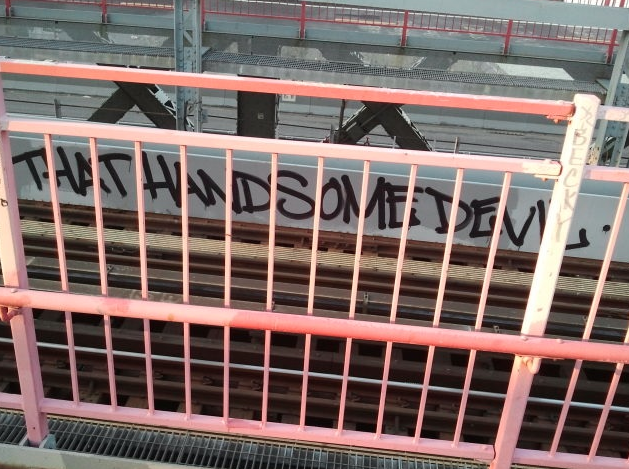 When you’re scampering down the Williamsburg Bridge, embracing how free you are because you have no dick between your legs, you’re liable to succumb to the temptations of spraying a little graffiti somewhere (since you clearly can’t spray semen anywhere). This irksome form of “self-expression” has resulted in such shitty tags as “JIMJOE,” “I ‘Star of David’ New York (which would be better if it was written as “I ‘Star of David’ Jew York”) and “Nite Owl.” 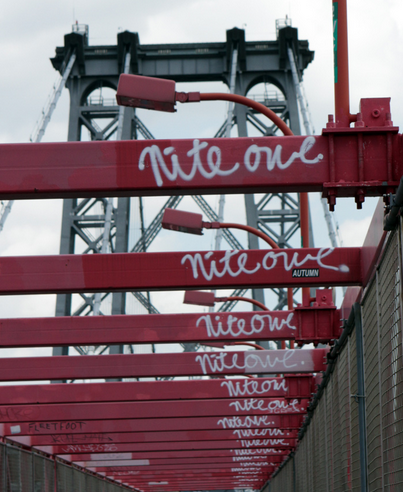 Whether man or woman, “Nite Owl” doesn’t have a dick

It’s difficult to be certain why “men” feel the need to mark their territory in such a base manner–though marking territory in general is always a base act. The only logical reason, really, is that it’s the closest they can get to experiencing the feeling of an all-out, unbridled, purging splooge. Because when you don’t have a dick, there are few other ways to re-create the singular act of ejaculation.
Widgets