Bill Clinton was once viewed as a generally bad mama jama. From being photographed with fast food workers to playing the saxophone on Arsenio Hall, the former Arkansas governor was often able to easily prove he was a man of the people in nearly the same sort of effortless way as Bernie Sanders currently is. Now, with his wife trying yet again to rally her resources in order to secure the presidency in 2016, it seems as though Bill is showing his true colors once more (like that time he lied about Monica Lewinsky and his fetish for berets).

To make sure everyone is aware of just how relatable his wife is to the “millennial” set, Bill is putting on a fundraiser at Brooklyn Bowl, a place he must assume is the pinnacle of the two qualities  his wife is looking for in a voter: youth and affluence. Though on the youth end, he might be disappointed, as one expects mostly 40 and up “men” to show up to the overpriced monstrosity ($250) in order to pay respect to a “man” they look to as something of a god for getting away with his level of cheating. But really, why bother attending if Monica isn’t there to re-enact a blow job while Hillary watches? 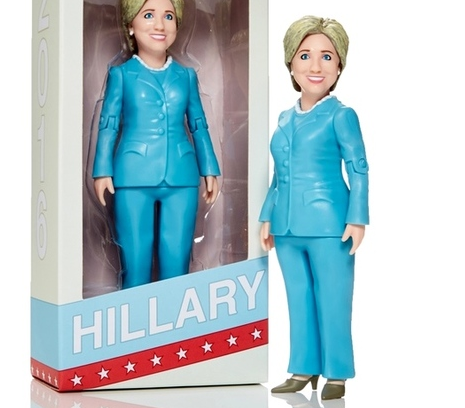 That’s why it’s quite infuriating that a Williamsburg “man” has decided to join forces with his girlfriend/female business partner (a hot trend in Wburg enterprises right now) to mass produce a Hillary Clinton action figure. While, from his perspective, he probably sees it as an homage or a sign of reverence–a misguided notion undoubtedly perpetuated by his naive girlfriend–there is nothing deferential about it. It’s actually quite obvious he’s trying to belittle her (literally) by making this product. You know what other kind of women are action figures? The kinds who use their body as bait. Is this something any true “man” could possibly feel Hillary would be on board with? Certainly not. I just hope she at least gets a pair of castration scissors as an accessory.