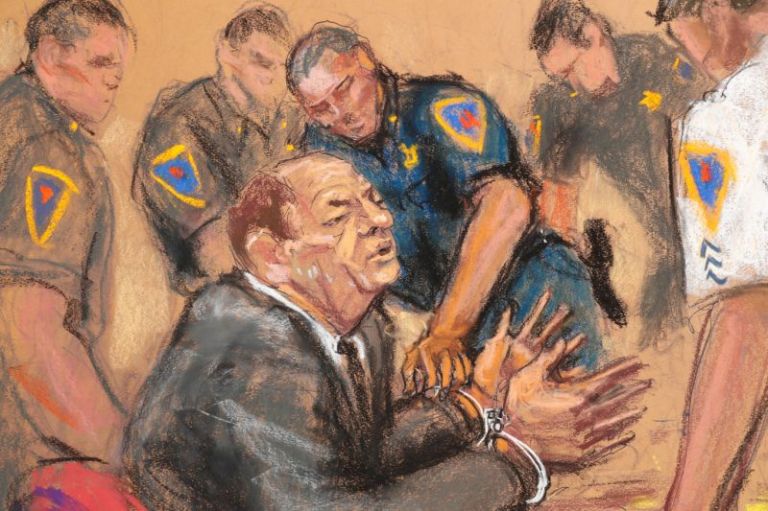 A “man” who brought us movie titles like Scandal, The Hour of the Pig and Scream could, of course, only be someone as predatory, foul and latently self-loathing as Harvey Weinstein. Yet it is that latency that makes Weinstein believe he is still somehow deserving of mercy after decades of assault and general perversion carried out at the cost of others’ permanent trauma. There can be no denying this is the reason he was conveniently rushed to Bellevue Hospital (a name still commonly associated with lunacy) after the pronouncement of his verdict in Manhattan on Feb. 24th: one count of criminal sexual assault in the first degree and one count of rape in the third degree. Sadly, he was not condemned on all five counts, one of them being predatory sexual assault, which would have led to a life sentence. But alas, women are supposed to be grateful for any legal comeuppance Weinstein has received. After all, something like two percent of “men” accused of rape are ever actually jailed for it. Weinstein, evidently, only wants to be part of the one percent wealthy instead of the two percent of convicted rapists. Surely that’s why he decided to have “heart palpitations” at the convenient moment of when he was supposed to be transferred to Rikers Island.

Instead, he was taken to the prison wing of Bellevue, where discussions centered around whether or not he’s “fit” to go to prison based on his deteriorating health is such a prudent idea. The answer, to be sure, is yes. Justice is always a prudent idea. The problem is, in our society, we’ve become so hung up on this notion of being able to forgive a monster in order to move on that we seem to all have forgotten how satisfying it is to slay a proverbial dragon. Watching it slump to the floor in a heap of defeat in some tower that seems to be a prison unto itself. A once “great” titan now nothing but the scaly sum of his deflated parts. Indeed, one hopes the part of Weinstein that has been his and countless women’s undoing is now forever deflated. Then again, a disgusting being such as himself could probably still get an erection in a cellblock. That is, unless the ultimate karmic justice is served and Weinstein is raped on the regular as the “freshest” prison bitch to arrive. Only then, perhaps, would he understand the same feeling of powerlessness he inflicted upon others for so long during his Hollywood Reign of Terror. Ah, but who is one kidding? No one wants to tap that. What’s more, it’s entirely likely that he’ll manage to weasel his way out of any real, truly harrowing jail time by playing the health card to its utmost potential. Because a “man” like him would surely go the way of Jeffrey Epstein if his sentence was actually enforced rather than given merely as a verbally symbolic gesture of the courts.