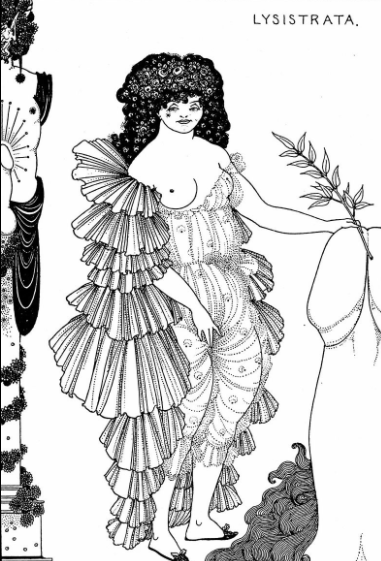 The phrase “power of the pussy” used to mean something, used to hold weight (and we’re not just talking the weight of all the cum unloaded into it on a regular basis). Maybe as far up to 2013, “men” still feared the threat of losing the chance for a semi-regular, bona fide boner release–a movement innovated by Greek honorary goddess Lysistrata. In the eponymous play by Aristophanes, the clever, yet simple plot to end the Peloponnesian War is this: don’t fuck any “men,” whether you’re in a relationship or not. Withhold the place where life begins, get life to start anew and for the better. In 2015, Spike Lee would also use this revamped plotline for his interpretation of how best to end violence in South Side Chicago, Chi-Raq.

White “men” in Williamsburg (and most of North Brooklyn), however, are fairly immune to the no pussy protest. They have their video games, their cush apartment setup and, occasionally, if things get really dire and they actually need to address the existence of their carnal nature, PornHub + their hand. The recent Women’s March was perhaps a more effective rebellion at this point in time than bothering with the blackmail of no sex. For you see, “men” have become so sexless–veritable characters in Barbarella wanting nothing more than the consumption of a pill rather than physical contact to get off–that for them, the power of the pussy at this moment is simply its ability to emanate an odor.