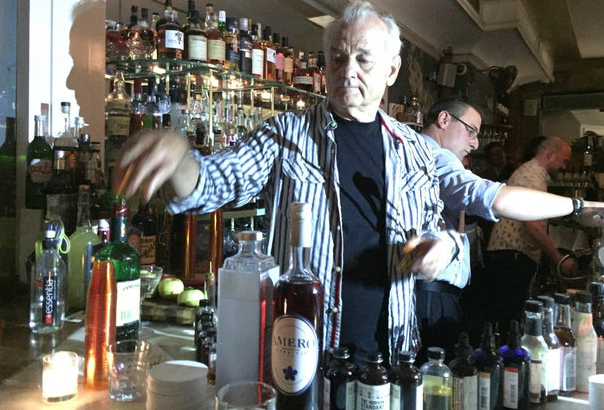 It’s difficult to fully pinpoint when Bill Murray’s resurgence in popularity came about–with specific regard to his mascot-like presence and lovability in Brooklyn. Maybe it was around the time after Lost in Translation came out. Whatever the case, the obsession many “men” and women alike have with Murray reached a fever pitch this weekend when the Ghostbusters icon appeared at his son’s bar to sling drinks.

With his son’s latest “project”–a bar/restaurant in the North Brooklyn nexus called 21 Greenpoint–opening, Murray decided to show his support by offering to tend bar. At first an open event, it quickly became invite only when everyone got wind of it. This still didn’t stop hordes of “men” from lining up around the block in the hope of gaining entrance to be served by a cult celebrity. However, more than wanting to go purely for reasons of “fanship,” the true motive for the “men” driven to the bar stemmed solely from the potential for a photo opportunity. But alas, only the most dickless of the lot managed to gain entry to snap their prized photo of Murray, who was appropriately soused to get through the event.