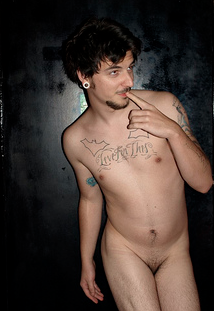 A lot of weird shit will happen to you if you open your mind, heart and pussy often enough in this town. You’ll see all manner of bizarre behavior that never before seemed an option in your realm of possibility. But after you get into the rhythm of strange disappointments, things like a “man” enjoying the display of tucking his “penis” under his butt cheeks after having sex with you won’t seem so far-fetched.

But it will seem, quite literally, dickless. You see, the tuck of the “penis” is not to be taken lightly. For one, it makes a mockery of just how many difficulties are involved in packing a vag, and for another, it’s an insult to the drag community, which takes the tuck very seriously when it comes to espousing female authenticity. And then there is the fact that a woman can become quite self-conscious after offering up one of the few sources of power she’s got in this life (apart from “solidarity” with other women) only to have the “man” she’s offered it to appear to want to turn female himself. It’s something of a swift kick to the ego. But then, a “man” with a vagina is probably more enjoyable to be around post-coitus anyway. At least then he won’t abandon you.