It isn’t just a certain Republican presidential nominee that has revived an interest in “men’s” activism. It’s that, for a particular sect of faux penis possessors, women have gone too far (see: Beyoncé), provoking a not so understated backlash that has left, in its wake, an absurd desire for women to, in essence, “be quiet” and stop looking and being so goddamn superior. 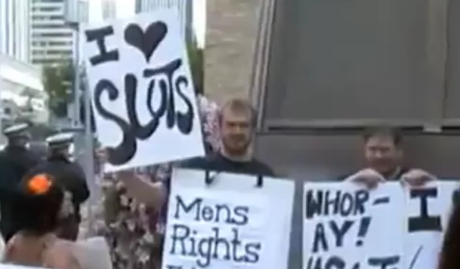 Some “rights” “men’s” activists are keen on

The steady build of “men’s” activism, which developed in the 1970s out of the fear that the feminist movement of the 60s was getting, well, out of hand–which just means a woman preferred to use her hand for other things besides cooking and manual stimulation of a non-existent dick–has only increased over time as a response to “men’s” natural panic at no longer being subjectively viewed as the “better,” more powerful sex. But the incongruity–the sheer oxymoron–of the movement and term is circumcised by one simple fact: women have never subjugated “men.” Instead, they have let them believe, all this time, that they have even a modicum of control, letting them be free–even with their derogatory “activism.” A feminist, on the flip side, is merely an advocate of equality, not oppression. Though, in the current epoch, it feels as though feminism’s definition is becoming dangerously muddled with misandry’s. Which, if “men’s” activists aren’t careful, will win out in the end.